We have two days off while we’re in Doha. Time to see what Qatar has to offer. Our first trip was to the desert, dune bashing.  There were a large group from the cast and crew going. Some, like us, taking the afternoon trip, while the others were staying overnight.

We were picked up in SUV’s. Five or six passengers per vehicle. The drive to the desert took about an hour.  The tour package stated that we would be able to take photos with the camels. When we got there we found that we could ride them for an extra 20 QR.  Of course we jumped on that.  Olivia and Eliana went first, so that allowed me to take some video.  They both said it was absolutely amazing! Next, my turn. I must admit, I was quite scared. I thought I was going to fall off when the camel stood up and it takes a little while to get used to the very bumpy ride. I can’t even imagine having to travel across the desert this way, but people did it. Coming down was even scarier than getting up. It was such an amazing experience. I had wanted to ride a camel when I was in Egypt, but hadn’t (not sure why).

Following our camel ride was the dune bashing. This was way better than a roller coaster. Fun, thrilling, scary, exciting, wow! The girls were giggling and screaming in the back. Clare almost lost it, she was so scared and I thought I was going to throw up the entire ride.  Every time we got to a huge dip the driver would ask if we were ready, to which the girls squealed YES! YES! FASTER! 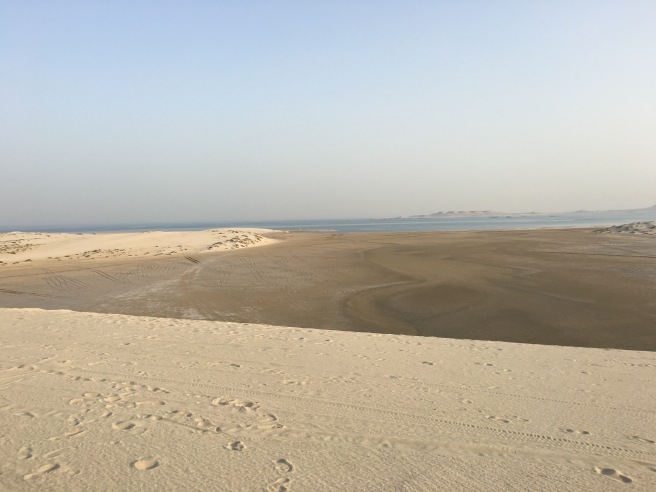 We stopped for a break over looking Saudi Arabia.  The view was breathtaking. The cast and crew were jumping down the large dune in front of us.  Olivia joined in the fun and Eliana decided that the only way she was going down was sliding, very slowly.  My stomach was not in it’s right place, so I just watched and recovered.  We stayed there for maybe twenty minutes before getting back into the SUV for more dune bashing.

We stopped for a second time at a camp site owned by the tour company.  It wasn’t the same site the others were staying at though.  As soon as the girls saw the camp they were begging me to stay. Had I known what this camp site was like, I would’ve absolutely booked the overnight.  It brings a whole new meaning to “glamping”.  It had queen beds, tv, ensuite bathrooms and a full service restaurant.

Some of the cast and crew played a little soccer with Olivia and Eliana. We relaxed a little and it was time to go back to the hotel.

Olivia and Eliana have said this was the best day of their lives. It’s certainly up there as one of mine. We may take a desert safari again next week in Abu Dhabi instead of the water park. I figure, we have water parks in NJ, but we don’t have a desert and camel rides.

A month layoff back home in NJ and we were more than ready to hit the road again. This time we we’re heading to the Middle East. First stop, Doha, Qatar.

I was expecting the worse from this long haul flight, but we broke it up a little by stopping in London.  Some airlines have food the girls like, British Airways is not one of them and I knew that before we got on the plane. It was my birthday, so we had a good birthday meal at the airport.  We took a night flight, which worked out really well. They both slept the entire flight. The next connecting flight was to Doha, with a stop in Bahrain, but we wouldn’t disembark the aircraft. We didn’t have very long to get to the next flight.  It all went very smoothly. Olivia slept another couple of hours and Eliana watched movies.  I didn’t hear any complaints at all.  They really are very easy to travel with. We arrived in Doha at 10:30pm.

There was quite a large line at immigration, but it moved quite quickly. Especially since you pay for your visa when you arrive.  We were out of the airport by 11:30pm and in a taxi to the hotel.

Our first thoughts of Doha was that it is really pretty.  As you’re driving you see illuminated posts which change colors from Green through yellow, orange, pink and blue.  When we arrived at the hotel we were greeted by the staff with a warm cookie. The porter took our bags up while we were still checking in and then escorted us up.  He was so friendly and asked us to please call him if we needed anything,  The hotel is absolutely beautiful. The girls were so impressed with our bathroom, which has both a big bath tub and a separate shower.  They’ve only seen that on TV before.  It was midnight and although the girls were not too sleepy  we went to sleep so we could be turned around by the morning.

It worked!!! Completely refreshed and ready for a swim, but first food.  We went downstairs to the restaurant.  Food at the hotel is really expensive, especially after getting used to the prices in Istanbul. Between lunch and dinner we spent $170 and that was for two kids meals at lunch and two main entrees at dinner. I’m so glad that on show days dinner is provided at the theater, otherwise we would be spending a small fortune on food alone.

We enjoyed a swim and gradually cast members appeared at the pool. We were all so happy to see everyone. Olivia and Eliana were having a great time playing sharks with some of the cast members and I enjoyed chatting poolside with others.  The pool is on the roof. They close it really early at 5pm.  The girls are not allowed up there after that since it turns into a club. However, it seems way too early to end our day.

The following day was our first day at the QNCC. It was tech/dress rehearsal. The theater is huge and really beautiful. The chairs are large and luxurious with fold out tables.  The crew had been loading in for a couple of days, so they were ready to start running a couple of songs and sound check when we arrived. I love the excitement of opening in a new venue.

We have our own dressing room and this time Eliana has her name outside too! She was so excited, jumping up and down with joy. Our container of books was placed in our room ready for us to start homeschooling again. (ok, she wasn’t so happy about that part).

Yesterday was opening night.  We were not being picked up from the hotel till 4pm, so we had the day to relax.  I decided to book a massage, my late birthday present to myself. It was exactly what I needed to get rid of any final kinks from flying.  There was a thunderstorm which was forecast to last the entire day, so we headed for the gym .  We had only been on the treadmills for about five minutes when a lady who worked there came over and said we would need to leave. I was so upset.  The girls had not been allowed in the spa area. They were not allowed on the rooftop after 6pm and now the gym too. Was there nothing they’re allowed to do at the hotel? OK, it looks wonderful, but they’re going to be miserable pretty quickly if they can only be in the room, especially with the long hours in the dressing room at the theater. Also, we’re touring, so they’re not getting any of the usual gym classes. They need to have exercise.  I went to speak to management. They could tell I was really upset.  They immediately apologized and gave us access to the gym. Of course, I wouldn’t have been nearly as upset if the sun was out and we could use the pool and to be fair, it’s unusual that the sun isn’t out here.

We left for the theater at 4pm.  When we arrived we had dinner and got some school work done.  Then it was showtime! It was a full house. 2300 seats filled. As the first song started we heard the audience applaud. Oh, that feels so good. Olivia’s face was gleaming. The show was wonderful and well received. There’s nothing like screams at the curtain call.

The QNCC will be our home away from the hotel till our last show here on March 19th.