Finally, after an exhausting tech, it’s opening night.  Last night we finished tech at 11pm.  We were told we would be getting the bus back to the theater at 10:30am.  Olivia almost burst into tears.  She was so tired and she really doesn’t do well with not enough sleep.  I know some kids who are fine with little sleep and I think that goes for most of the kids in this industry, but it’s definitely not the case with Olivia and one of the only things that makes me thinks she’s not well suited for the life of the child actress.  Also, for the past two days she’s just not eating properly. She’s lost her appetite, but get’s hungry when it’s impossible for me to get her anything other than junk (muffins, cookies), so by the time she can eat a proper meal again, she’s not hungry.

I woke Olivia up at 9:30am for breakfast and to get ready for the bus.  As I had thought, there really was no need for us to be there.  She wasn’t needed till final dress rehearsal at 3pm.  I really wish I had played the mommy card and said she needed to sleep to be at her best for opening night.  Olivia wouldn’t eat lunch, but halfway through dress rehearsal said she was hungry and needed a snack, but didn’t want a meal. I got her a chocolate muffin.  By the time the dress rehearsal ended she just couldn’t stay awake and had a headache. Eliana and I left her in the dressing room to take a nap. She didn’t want any medicine for her headache.  When I came back an hour later I knew we had a problem.  Olivia had zero energy, looked miserable and I could tell her head really hurt. I made her take some advil, but I knew this ends up with only a couple of outcomes.  She either needs to sleep for an extended period, or she’s going to throw up.  I spoke with Clare, but Olivia told her she will make it on stage no matter what.  We were one song before Olivia was due to go on stage (Duloc) and she suddenly threw up. It was like a horror movie and covered nearly the entire bathroom.  I’ve never seen anything like that. It was all over her dress and her tights.  Eliana ran for help, but somehow managed to stay backstage chatting. I realized she wasn’t coming back, so I called Lindsay (Fiona) from the dressing room next to us.  I really didn’t want to bother her.  A minute later we had wardrobe in the dressing room and the tour manager.  I cleaned Olivia up as best I could and off she went to the stage.  The thing about Olivia when she gets like that, is that as soon as she’s thrown up, she’s completely back to normal.  She managed to perform beautifully, despite the major wardrobe malfunction.  As soon as she came off stage wardrobe took the dress away to clean.  It appeared again after half time, perfect…Magic!  The rest of the show went just fine for Olivia. She played Grumpy, and took her bow. 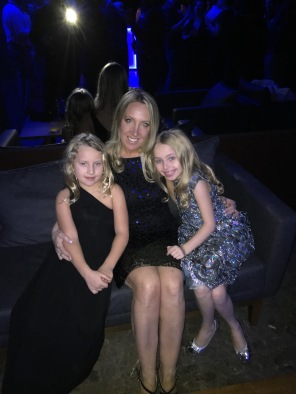 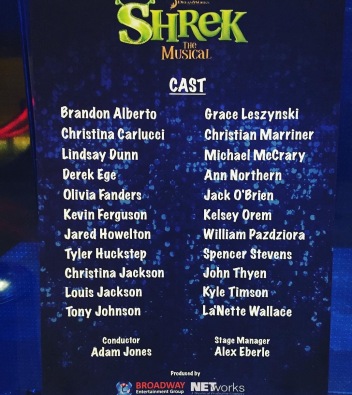 There was an opening night party.  Olivia and of course Eliana, didn’t want to miss that.  I said they could go for a little while, but they needed to get back to the hotel to sleep.  The girls wore beautiful dresses and felt like princesses when they walked into the lounge vibe party.  It was a beautiful event.  Not at all for kids.  Eliana commented “this is not a kids party” I don’t know what she was expecting.  We stayed for about thirty minutes and went back to the hotel to bed. Not at all the opening I would’ve liked for Olivia, but it all worked out in the end.