As much as we enjoyed Doha, we definitely felt it was enough time to move on.  Everyone we met was telling us how much more we would enjoy Abu Dhabi and Dubai and there was so much to do there, almost down playing Doha.  Doha is building at a rapid pace in the hopes, I think, of becoming the next Dubai, but they are yet to have the visitors. They’re way more religious and you need to be respectful of the way you dress, but we didn’t feel this to be restrictive at all.

We were not to leave without experiencing the Souq Waqif.  It was like an Epcot version of the Grand Bizarre without the congestion. Kind of a theme park like market and we thought it was just so beautiful. We bought some pearl bracelets for Olivia and Eliana and a bracelet to keep the evil eye away for me.

We took a flight to Dubai and then a bus to Abu Dhabi.  The reason for traveling this way was that our flight back to NY would be from Dubai. We arrived at 9pm on Sunday evening really hungry.  The kids hadn’t eaten since breakfast apart from a couple of muffins at the airport, so we asked the front desk where we could eat.  Once again we were confronted with the problem that we couldn’t eat in the restaurant cause it was closed to kids at 9pm.  The front desk staff explained that our only option was room service.  I was so frustrated.  Anyone who stays in hotels knows it’s not cheap to order room service and although I don’t mind having to order when we need it, the thought that after 9pm every night the kids are going to have to order from the room was ridiculous.  We were all tired and cranky and this was just not what I wanted to hear.  This is when the tour family happens to really step in and be a family.  I have grown to have a few individuals on the tour who I really enjoy being around, who are good and sincere with my girls and also seem to be quite in tune if I’m feeling a little off (which honestly I try not to let happen).  We came down to the lobby after putting our bags in the room and seeing that I was upset, one of the cast members asked why. I explained that we were hungry and were not allowed to eat in the hotel since it was after 9pm and we really didn’t need to be stuck in the hotel room after traveling.  He said they were going to the mall, to the Cheesecake Factory, so we should join them.  He saved my day.  There were about twenty of us that evening.  It was amazing how that just completely changed my mood.   I know it seems like such a small thing, but after the kids going through this in Doha and knowing that I would be arriving home after shows with hungry kids, at that moment seemed awful. The hotel staff had neglected to tell me that there were plenty of food options without having to order room service. The malls have restaurants open late and even in the plaza where our hotel was there were plenty of other dining options. It turned out just fine. Kids in the Middle East stay up extremely late. Unlike American kids where we’re used to having them down by 8:30-9pm.  You’ll see kids in malls at 11pm on school days. Even our evening shows in the Middle East didn’t start till 9:30pm.

Our hotel was on Yas Island where the theater, Ferrari World, Water Park and the amazing Mall, Yas Mall, were situated.   We woke up earlier than usual to make sure we got a full day of enjoyment on our day off. We made it to Ferrari world at the opening. They had a great deal, buy one, get two free, absolutely perfect for us. Ferrari World is known for having the fastest roller coaster in the world.  We didn’t take that ride, not only cause the girls were too small, but there’s no way I would’ve. I used to love roller coasters, but something about my body chemistry certainly changed after having kids.  It was so nice to have a theme park without the lines.  We were able to go on every ride we wanted, see the shows and still be out in four hours.  We got lunch at the mall and went back to the hotel to spend the afternoon in the pool.

Tuesday was our only other day off.  The girls loved the desert safari so much in Doha, we decided that since we would probably not be in a desert anytime soon, we would take the safari again. This safari had a lot of added bonuses.  A BBQ, belly dancers, sand sledding and henna tatoos.  I must say, it’s never as good to do the same thing twice, however the food and entertainment were certainly better on this safari. Our safari in Doha had better weather, I loved over looking Saudi Arabia (there was something quite movie like about it) and we were in the company of our tour friends.  Unfortunately, this time, Olivia got one of her headaches during the dune bashing. As anyone reading this blog knows, they don’t end well. She was throwing up, or half asleep from the time we got to the camp till we got back to the hotel.  I really wish there was something I could do to make this better, but I’m guessing she inherited these migraines from my mother and my brother is also suffering from them.

Our last morning before we started tech and there was one more place we wanted to visit.  The Sheikh Zayed Mosque.  This absolutely stunning mosque was built recently in 2008.  It’s a short trip and you can’t visit Abu Dhabi without adding this to the places you should see. I was dressed in what I would consider conservative clothing, but they still required I change into their robes.  It was so hot in the mid day heat.  It made me feel quite awful for the women who wear these clothes all day.  We didn’t stay long at all.  Just enough to view and take pictures. The girls were turning quite red from the heat too. 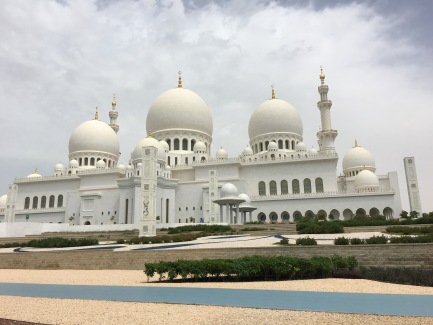 The rest of our time in Abu Dhabi was dedicated to the show.  This was our first arena and with that comes new challenges for the cast and crew (but mainly the crew).  Our dressing room was outside in a trailer.  This was so exciting for the girls. I really liked this set up. It made homeschooling very focused.  I had really started to notice a change in Eliana’s homeschooling. She’s seemed to let go of fighting me and wants to do the best she can. Her reading is coming along leaps and bounds and math has been focused on money, which she is very interested in, so we have introduced real world money into her daily math problems. I give her my wallet and she pays the bill, working out which notes she needs. She tells me what she needs in change and what she will leave as a tip  She’s got a really good handle on this. We have a lot of work to do on composition, but she’s enjoying reading more and she’s never had a problem spelling. 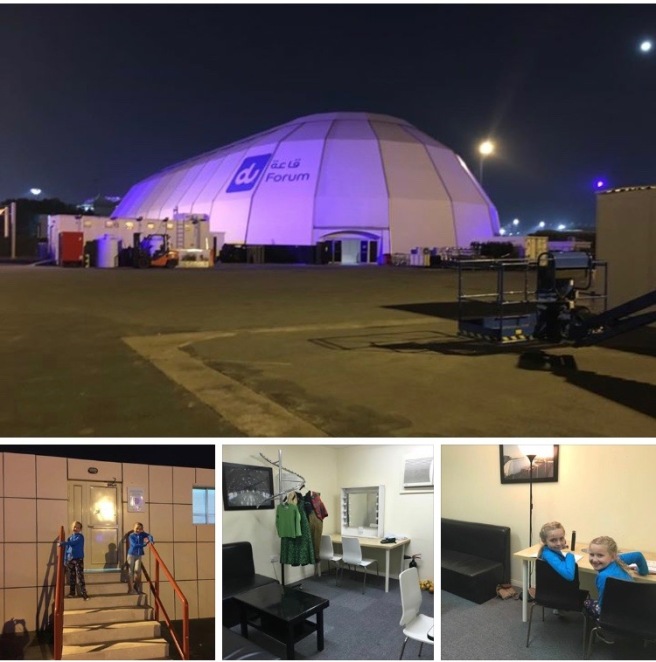 The show was well received in Abu Dhabi with a good turn out. I felt it was more like a concert than a theatrical performance with the screens on either side of the stage. Audiences are so different in the Middle East. Where we’re used to everyone sitting still, people will be eating, coming in late and kids are wandering around.  Olivia is so focused as a performer, she doesn’t notice anything out front. She still asks me every time she comes off stage how her performance was.

Eliana has taken to every aspect of being part of the theatrical life. She’s helped the sound engineers break down a speaker and microphone and watched the makeup artist transform   characters. She loves make up so much and comes up with her own creation by the end of most days. I can’t say I’m thrilled to see her plastered in make up, but she loves it, and this is the life we’re living right now.

There were three double show days in Abu Dhabi before we left for Dubai which was less than a two hour bus ride.